Parasitic plants are something that should be a lot more well-known. Honestly, all plants should be more well-known, but I'm getting ahead of myself. Parasitic plants are a varied group, with two main types. The first group are plants that still gain energy from photosynthesis, but take water and/or nutrients from their host, similar to how carnivorous plants take their nutrients from insects and some unlucky vertebrates. These are called hemiparasites. The other type, called holoparasites, derive all of their food from other organisms, and can be a range of colors other than green. The boundaries between the groups can be vague, with some plants changing their behavior in reponse to enviromental conditions, and others being too poorly understood for science to say. Hemiparasites can be subdivided into facilitative and obligate parasites, depending on if they need a host to complete their life cycle or not, and both groups can be further specified with what part of the host they attach to, and if they even parasitize other plants at all. Needless to say, they are a complex group. 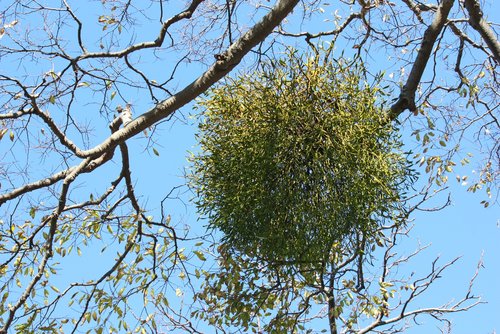 Mistletoe plants are obligate stem hemiparasites. In some cases they grow so large they completely take over the tree, killing its leaves and replacing the crown to the point where it resembles a new species.

Hemiparasites are rather traditional, which makes them easy to miss. Some examples are mistletoe, yellow rattle, and plants of the Orobanche genus. Root hemiparasites are especially difficult to identify due to being both green and ground-based, so you'll probably only be able to identify them by memorization. Stem parasites are a bit easier, since they appear in branches, without any roots connecting it to the ground. Without that connection, a plant's options for getting much-needed water are limited. Other groups of plants can get water from rain or mist, but if the plant is in an area without regular fog or a specialized cup for catching rain, its likely a parasite. Anything beyond that is outside of where I can say anything with confidence. Holoparasites are a lot easier, since they can get really, really weird. 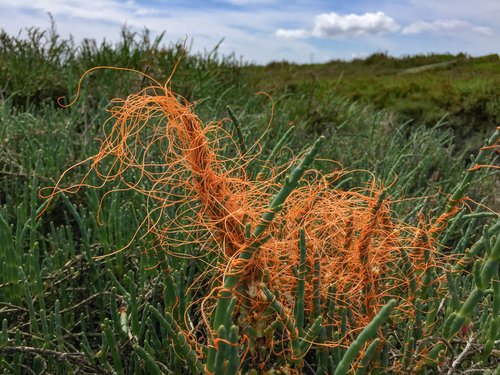 Dodders are stem holoparasites with tiny, scale-like leaves that grows in such a way that it seems to hunt for potential hosts.

Holoparasites are an interesting group. Since they don't photosynthesize, they aren't green, and often come in shades of yellow, red, or white. They are always obligate parasites, but their location and host can vary. A favorite of mine are the myco-heterotrophs, which are plants that get all their energy from fungi, which in turn gain their energy from the roots of other plants, making them hyperparasites. Some examples of this unique subcategory are the Cryptothallus genus of liverworts and non-photosynthetic orchids. Back to holoparasites in general, they can take some incredible forms due to their lifestyle, with many plants lacking features most would call vital to plants. A great example is Rafflesia arnoldii, which produces the largest single flower in the world. The plant lacks leaves, stems, or even roots. It gets energy from thin strands embedded in nearby vines, and only becomes visible when it's ready to reproduce. While few plants are as wild as Rafflesia, some come close. The dodder plant is not only is it an aggressive grower that can easily become invasive, it actually seeks out host plants by searching for the airborn chemicals they release. Another example is Hydnoroideae, a group which is too complex for me to even touch on. You'll have to see it for yourself.

Ghost Pipes are hyperparasites that appear for only a few days at a time, during a period of moisture after a long dry period.

Parasitic plants are far more common than most people think. It's a common preception that unusual plants and animals naturally belong in far-off jungles and tropical islands, when nothing could be further from the truth. While those places tend to have more ecological diversity, which presents more opportunities for strange things to develop, there's nothing about North America or Europe that makes plants any more "normal". This brings me to a personal favorite of mine, Monotropa uniflora, or the ghost pipe. Or the corpse plant, but there are a lot of plants called corpse plant/corpse flower. People seem to like that term. Anyway, it's a myco-heterotroph that lives scattered across Asia, Eastern Europe, North America, and South America. One of it's locations happens to be in central Maine, where my family lives, and where I spent every summer of my childhood and teens. I knew a little bit about the plant itself for a while, but I didn't know it's range. Until one day I just saw one. Right there, in the woods, not even that far off the path. I didn't know it could be there, but it was, and I was stunned I could identify this tiny little flower from a single look. It was the start of my interest in botany, and I still love it today. 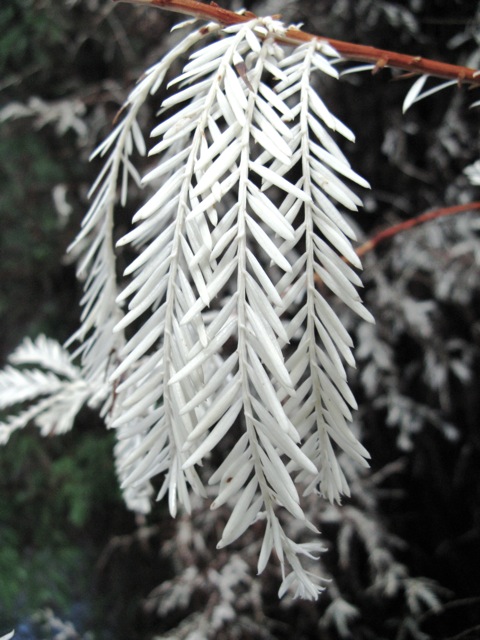 Now for a little story. Redwood trees have the ability to transfer sap from one tree to another through roots. Pretty normal, yeah? Redwoods will sometimes reproduce by sprouting new trees from their root system, so it makes sense to transfer nutrients and energy from successful adults to budding saplings in order to get them started. Well, Redwoods will occasinally mutate in such a way that they will be unable to produce chlorophyll. This not only turns their needles a ghostly white, but makes them unable to survive on their own. It would be logical to think they'd perish, like most other plants that mutate into that state. But they don't. They live for years, despite missing one of the most basic aspects of a plant, just on sap from their neighbors. That's what I love about botany. Plants adapt. Even when they're put in the strangest situations, they'll find some way to make it work.

Click here to go back to the biology index